With a 12-story, soaring glass-windowed façade topped by a sophisticated rooftop bar, the new East Tower at the Lancaster Marriott at Penn Square and Lancaster County Convention Center rolls out an exquisite welcome mat to visitors of the Red Rose City’s historic district. The $39.4 million expansion and refurbishment project adds 110 guest rooms, equipped with advanced amenities, and a signature Marriott M Club Lounge. It could only be executed by a team of developers, designers and investors committed to preserving Lancaster’s quaint charm while boldly asserting its claim as a burgeoning mecca for tourism, dining and business investment.

Led by Penn Square Partners and High Real Estate Group LLC, the team includes architect Cooper Carry Inc., general contractor High Construction Company, and owner the Redevelopment Authority of the City of Lancaster. They deliver a capstone befitting the Marriott and Convention Center which has been a catalyst for more than $1 billion in economic development since its doors first opened in June 2009. Located at the intersection of King and Queen Streets – “the heart of the heart” of downtown Lancaster - the hotel and Convention Center celebrates 10 years of exceeding expectations for revenue and usage.

“This project gave others the confidence to make a significant investment in Lancaster City,” said Mark Fitzgerald, President & COO, High Real Estate Group LLC. “It dared us to think big. And now, our hotel is recognized as one of the best in the Marriott chain. So, we can think bigger and we can be bolder as we imagine and create Lancaster’s future.”

A DYNAMIC CATALYST FOR TOURISM AND JOBS

“We caught a wave. We caught a wave of people wanting to be in this city,” said Tom Smithgall, senior vice president, High Real Estate Group LLC. “With the Marriott and Convention Center, we provided a place to be, and that economic catalyst that occurred with the public and private investment was the spark that was needed.”

The 87,000 square-foot East Tower expansion capitalizes on the pulsing downtown vibe and food fervor with two new restaurants; Plough, located at street level, features an open kitchen and modern-American menu, and The Exchange, a sleek rooftop bar, presents sharable plates and inventive cocktails amidst panoramic views of the city and beyond.

“Lancaster is gaining national attention for its vibrant restaurants with cuisine that centers on farm-fresh foods sourced here in the fertile heartland of Pennsylvania,” noted Josh Nowak, director of sales & marketing, Lancaster Marriott. ”We’re located around the corner from the nation’s oldest working farmers market and our chefs routinely incorporate their regional ingredients into our daily dishes.”

The Marriott and Lancaster Convention Center is a transformative regional asset that reflects the pride of place embodied by the community’s residents. The facility’s public-private partners adhere proudly to a set of Guiding Principles that ensure the project preserves and sustains Lancaster’s rich heritage, historic sites, and the city’s inherent livability. In recognition of that commitment to stewardship and smart growth, the Urban Land Institute Philadelphia bestowed on the project its inaugural Willard G. “Bill” Rouse Award in 2014.

“Our development philosophy is collaborative which means we take the time to really listen to the community,” explained High Real Estate Group’s Fitzgerald. “We look for the tough projects. We don’t back away from them. We look for projects that help to reshape, define and enhance the communities where we operate in such a way that when we’re done, the whole is greater than the sum of the parts.”

With the East Tower complete, the beautification of the Marriott’s existing West Tower is underway. As demand for exhibition space grows, the Convention Center is well-positioned to double its existing 50,000 square feet of floor space and capture more of the nation’s convention, leisure and business traveler market.

The Marriott at Penn Square and Convention Center, the crown jewel of Lancaster’s sparkling downtown, will welcome those visitors with the warmth of a Red Rose City embrace.

ABOUT INTERSTATE HOTELS AND RESORTS 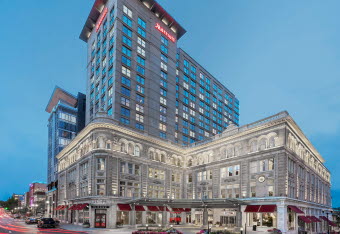