Lancaster, Pa. (January 1, 2014)—Since its grand opening in June of 2009, the beautifully integrated Lancaster Marriott at Penn Square and Lancaster County Convention Center has provided a magnificent setting for hundreds of events –  and hundreds of thousands of visitors. Additionally, more than two dozen new restaurant, retail, and service businesses have opened in the Downtown core and Northwest quadrant of the city since the opening.

The $177-million facility, fronted by the beloved and iconic façade of the former Watt & Shand department store, has already begun to deliver on its promise – representing a brand new chapter as the largest economic development project in Lancaster County’s history and another step forward in the ongoing momentum of Lancaster’s vitality and success.

A public/private partnership led by Penn Square Partners and the Lancaster County Convention Center Authority, the integrated facility hosts diverse events from 5 to 5,000 people including conventions, conferences, consumer shows, galas, weddings, competitions, sporting events, and musical showcases. Its location, convenient to the major metropolitan areas of the East Coast, combined with the reasonable cost and exceptional customer service ethic of Lancaster, combine to make the facility an ideal destination for many types of events. Add the important historical elements and urban sophistication, along with the adventurous and artistic sides of Lancaster, and you can see why the venue is truly unrivaled.

The facility offers 299 rooms and suites and 90,000 square feet of finely appointed meeting and event space, including a grand exhibit hall, two elegant ballrooms, and a varied selection of meeting and board rooms. A beautiful spa and pool, spacious fitness area, and signature Penn Square Grille round out the amenities that create the ultimate guest experience.

For information about all of the exciting upcoming events, visit the facility’s calendar page at www.lancasterconventioncenter.com and the Penn Square Grille’s events section at http://www.pennsquaregrille.com/specials.html. 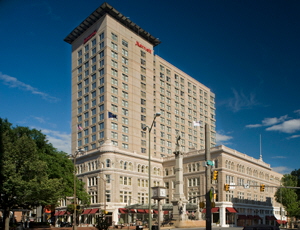